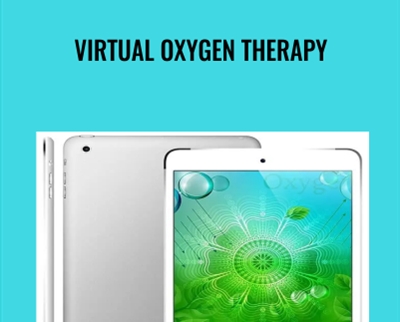 Buy Virtual Oxygen Therapy – Eric Thompson - $33.00 Course at esyGB. You will have immediate access to the digital downloads in your account or your order email.

For anyone who wants to safely and easily increase oxygen (without an oxygen tank).

Here is what you can expect:

In healthy people, increased oxygen to the brain can improve performances on tasks that require great mental effort, in addition to slowing the rate of fatigue for people who easily get tired (often a sign of oxygen deficiency).

Similarly, increased oxygen to the brain can stimulate better blood flow throughout the body and enhance motor skills.

At even higher levels, increasing the level of oxygen in the brain has dramatic effects on your health.

According to research by Tel Aviv University, there seems to be a connection between hyperbaric oxygen and improvements in brain functioning after brain damage.

Some of the benefits of such dramatic increases in oxygen to the brain include:

What is Virtual Oxygen Therapy?

You might think of it as a kind of “amplified digital homeopathy,” but it’s far more powerful than traditional homeopathy.

Simply open the Virtual Oxygen Therapy digital file (in audio, video or picture file format, whichever format best suits your needs), and these energetically encoded digital files will automatically transmit the amplified energetic wave pattern of oxygen through your phone, tablet, computer or laptop. By replicating the precise wave-like properties of oxygen directly into the human biofield via subtle energetic resonance, increased oxygen flow can be experienced in the brain and body.

Plus, unlike other oxygen supplementation therapies, you only need to purchase Virtual Oxygen Therapy once in order to benefit from it for the rest of your life!

Sound impossible? Too good to be true?

There are two basic energetic signatures that comprise the Virtual Oxygen Therapy program:

What is Subtle Energy?

Science tells us that we live in a virtual sea of invisible fields of influence that impact our daily lives in profound ways, yet we typically have little or no conscious awareness of them.

In Science, these phenomena include…

The activity of the Earth’s geomagnetic field, which has been shown to be correlated with various emotional and psychological states in human beings.

The strong nuclear force, which is more powerful than electromagnetism and therefore holds positively charged protons together within the atomic nucleus.

The biophoton field in plants and animals, which is believed to be the chief means of communication between DNA molecules across the entire body of a plant, animal or human.

These and other forces play crucial roles in our lives. And if it weren’t for science informing us of their influence, most of us would remain entirely unaware of their existence.

In the early years of science, for example, the scientific community could not directly detect or measure electromagnetism, yet science knew it existed because it could detect its effects on other objects. The same can be said of “subtle” energies. While it is currently not possible to directly detect or measure subtle energy using conventional electromagnetic instruments, it is possible to detect and measure its effects on living organisms.

What is an Energetic Signature?

In his book, The Basic Code of the Universe, Dr. Massimo Citro speaks of a basic governing “code,” made up of “the ensemble of information that allows bodies to exist, the blueprint of the construction.” This code can be thought of as having both an informational component and an energetic component, the former informing a particular substance how to “be” itself, and the latter providing the subtle vehicle for the flow of that information. It is this basic governing code that we refer to as the “energetic signature” of a substance.

This is our proprietary 3-step process to encode Subtle Energy Signatures into digital media:

First, we capture and extract the energetic signature (of a substance, intention or shape) digitally using a combination of quantum energy techniques derived from the study of sacred geometry, shape power, homeopathy, radiesthesia, radionics, energy healing and quantum physics.

This is all done using a very scientific and replicable process. Once we’ve captured the initial energetic signature digitally, we amplify that original extracted digital signal billions and billions of times in a balanced way.

The final step is to encode the amplified energy signature into digital media (including audio, video, and image files) in such a way that when the digital media file is opened on a computer, tablet or phone, it will emit the energy of that signature through the electronic device.

Buy the Virtual Oxygen Therapy – Eric Thompson - $33.00 course at the best price at EsyGB. After your purchase, you will get access to the downloads page. You can download all the files associated in your order at here and we will also send a download notification email via your mail.