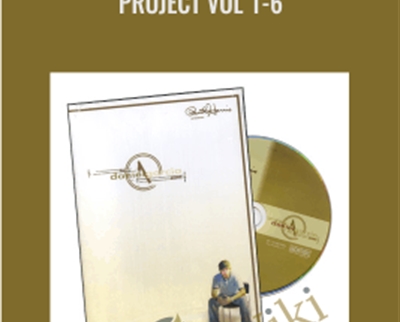 Paul Harris presents the Daniel Garcia Project! Daniel Garcia absolutely fries the most discerning spectators, using the best of both classic effects and real-world technique updated with some new stuff that only Daniel could have created…

Buy Project Vol 1-6 – Daniel Garcia - $11.00 Course at esyGB. You will have immediate access to the digital downloads in your account or your order email.

Paul Harris presents the Daniel Garcia Project! Daniel Garcia absolutely fries the most discerning spectators, using the best of both classic effects and real-world technique updated with some new stuff that only Daniel could have created.

Satisfaction Guaranteed: Starts where most All Backs Routines end, and then goes two climaxes better.
Personal Safe: Coins across-into the spectator’s hand. Plus a killer finish: the last coin changes places with the spectator’s ring which actually vanishes from their hand.
Twisted: Instead of wasting time on minute handling changes for the bill switch, Daniel improved the effect. Now you wave your hand over the bill, and it visibly changes to a hundred.
Ego: How many card effects have one great new move? This one has two! You find the card the spectator’s thinking of with the fastest card change you’ve never seen. If you don’t have an ego, this will give you one.
Third Degree: Use this only if you’re prepared to really freak people out. You find a selected card by burning a cigarette through the deck-it stops on the selection.
Rubber Made: A banquet of visual impossibility with a borrowed ring and two ordinary rubber bands. Daniel’s killer routine has three phases and half a dozen visual miracles. Then the climax-you hold both rubber bands in your hands and openly toss one at the other, where they link, untouched, in midair. Unlink the bands and hand them for examination.

Daniel Garcia’s bold methods and a working pro’s eye for routining take some of your favorite classics to new DG inspired heights.

Only Four: Shadows coin for the 21st century. Only four coins are used-totally clean, and you can stop worrying about flashing the fifth coin.
Scatter: A mental and physical impossibility-a card trick that uses no cards.
Motion: A Haunted Deck routine that needs no gaffs, no preparation-all you need is this DVD.
Bad Habit: A strikingly visual routine with a coin, a cigarette box, and a spectator’s hand.
Chi!: A coin is held at the fingertips and punctured with the magician’s finger. And yes, the coin is signed. What more is there to say?
White or wheat: The spectator examines the aces, which you cleanly place on the table with empty hands. A second later, the selected card is found between them. And then the spectators examine the aces again. Includes the Ego slip control, which you absolutely will use.

Your journey through the Daniel Garcia Project concludes with a final dose of mind-shattering effects. Some completely impromptu, some taking maximum advantage of devious preparation. As always, Daniel brilliant combination of unexpected methods and advanced canceling create visual new versions of some classic astonishments.
Nacho Momma’s Triumph: Features a surprise finish, now entirely in the hands. This will hook, reel in, and land all your magic buddies-add a little olive oil and they’ll be completely fried. Needless to say, laymen have no chance.
Quarters: A relentlessly impossible coin through glass routine. Includes the damnedest visual penetration: you drop a coin in the glass-it really goes in the glass-and it falls right out the bottom. Uses any glass.
Windex: Draw a window on a signed card, then open the window to create a large opening in the card as well as in the spectator’s brain. Leaves a permanently impossible souvenir.
C.A.A.N.: Any card freely named is found at any number from 1-52. Totally clean. All in the hands. Mucho Easy.
Joe Blow: Talk about packs small plays big… this impromptu wonder requires only a tiny scrap of paper and a spectator to witness a miracle. Over and over again, you wiggle your finger and cause a piece of paper to fall over. Every possible explanation is brilliantly cancelled. Warning: Some people will actually believe it’s real (present company excluded).

In 2005, Daniel Garcia started production on a 3 volume DVD set that what was soon to become an instant classic among the magic community. With highly visual effects, and off the wall techniques, The Daniel Garcia Projects became a must-have for a new generation of magicians as well as seasoned professionals. Now, with the help of Paul Harris and the Buck Twins, Garcia has signed off on the final chapters of his new set. Welcome to the much anticipated release of:The Daniel Garcia Projects volumes 4, 5, and 6.

William Tell:Show your archery skills by causing the Ace of Spades to pierce the deck finding a previously selected card. Complete with a “Kicker Ending” and an alternate handling.
Jacob’s Ladder:Watch as a single dollar openly and VISUALLY penetrates a rubber band being held by the spectator with NO COVER and without the magician even touching the bill.
The DG Box Steal:Learn a new utility move that will change your card magic forever.
TimeLine 2.0:Garcia tackles the Mystery Card Plot by causing a selected card to change into a previous prediction that has been signed and held by the spectator from the beginning of the effect
The OG Transpo:The magician secures a selected card in a card box and under the spectators hand only to cause it to change places with another selected card instantly. No extra cards, no dupes, and not to mention, both cards can be SIGNED.
Micro Dissolve:An extremely visual impromptu copper/silver transposition using NO EXTRA coins
Scorch:Fire and card magic at its best. Watch as a candle flame slowly vanishes and finds a signed selection by magically scorching the back of the card.
iCard:Included on this dvd is the bonus files for Daniel Garcia’s signed card to iPhone. NO APP NEEDED.
Party Perception:Be able to divine a mentally selected word from a beverage container without the use of any prying questions.

Void:Daniel Garcia’s completely impromptu handling of Timothy Wenk’s MISLEAD. Cause a drinking straw to visually penetrate a dollar bill 3 times, with the last phase being held by a spectator.
In Visible Monte:Perform the classic 3 card Monte all in-the-hands and with the “money card” FACE UP. Complete with an unsuspecting added climax and alternate ending.
Lotto:Visually change a winning lottery ticket into cold hard cash and show each bill 360 degrees.
The Airbrush Change:a modern and fine-tuned handling and medley of Marlo’s Face Up Startler Change and Roy Walton’s Paintbrush Change.
.44:Magically cause a four of a kind to transpose with another four of a kind in the spectators hands,
Math:Two, and ONLY two, quarters jump from hand to hand and then visually morph together in mid-air changing into a half-dollar.
The Gambler’s Swap:Watch as a 4 of a kind magically change places with a 2 of a kind in a spectators hand.
iScatter:Included on this dvd is the bonus files to pull a THOUGHT OF CARD out of your iPhone. NO APP NEEDED
Fire and Smoke:Learn Garcia’s version of the classic “Oil And Water” effect. Cause 3 red and 3 black cards to separate and un-mix with no extra cards and apparently no sleight of hand. Complete with a FULL DECK un-mixing that the SPECTATOR shuffles.

V.I.S.A:Visual Instant Static Attraction. Instantly cause the magnetic strips on two credit cards to ACTUALLY become magnetized, attracting and repelling each other.
One Point Production 2.0:An extremely visual production of a single card that can be performed all in-the-hands!
Pop:Magically cause a signed playing card to appear INSIDE of a balloon that the spectator has inflated and is holding.
Vortex:Cause a selected signed card to appear BETWEEN a spectators hands without touching them
Ham and Cheese 2.0:A revamped version of Daniel Garcia’s classic effect “White or Wheat” all done in the spectators hands! Magically cause a signed card to appear between two jokers INSTANTLY and VISUALLY.
Static Sandwich:A magical combination of “V.I.S.A” and “Ham and Cheese 2.0” where a selected card visually flies out of the deck and is caught between the two jokers as if attracted my a magnetic force.
On The Rocks:One of the most visual coin through glass effects you will ever learn with NO EXTRA coins!
Tric-Tac:Visually change the color of every single Tic-Tac in the container and IMMEDIATELY let the spectator examine everything.
iATM:Included on this DVD is the bonus files to magically pull money out of your iPhone. NO APP NEEDED
The OK Coin Vanish:Seen on volume two of The Daniel Garcia Project, but not taught, now learn Daniel’s one handed coin vanish. Complete with alternate handling.

Buy the Project Vol 1-6 – Daniel Garcia - $11.00 course at the best price at EsyGB. After your purchase, you will get access to the downloads page. You can download all the files associated in your order at here and we will also send a download notification email via your mail.