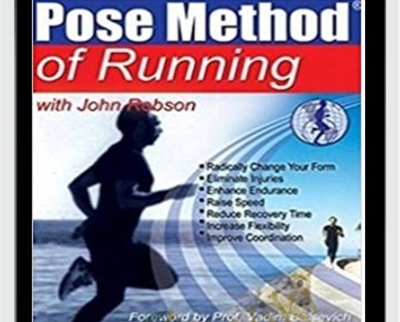 In a very succinct and enjoyable manner, it teaches one to perform to the very best of his ability, using the Pose running technique. In ballet, or martial arts, one requires practice of technique.

Buy Pose Method of Running Complete – Nicholas Romanov - $23.00 Course at esyGB. You will have immediate access to the digital downloads in your account or your order email.

Dr. Romanov's Pose Method Of Running brings his revolutionary ideas that changed the world of running to the professional athlete and amateur alike. In a very succinct and enjoyable manner, it teaches one to perform to the very best of his ability, using the Pose running technique. In ballet, or martial arts, one requires practice of technique. The same is true of running. Unless you are one of the lucky ones, like Haile Gebrselassie, Steve Prefontaine, or Michael Johnson, who were born with the perfect technique, you have to learn it. Until Dr Romanov's discovery there was no coherent theory on the subject. Running was practiced, but not taught as a skill. The Pose Method proposes to teach running as a skill with its own theory, concepts, and exercises.

Like any brilliant idea, the idea behind the Pose Method is simple. Every movement is built on an infinite number of poses, or positions, through which the body goes in space and time. In running, Dr. Romanov focuses on only one pose, which he calls the Running Pose. It is a whole body position, with vertically aligned shoulders, hips and ankles that creates an S-like shape of the body. The runner then changes the pose from one leg to the other allowing gravity to draw him forward. This creates forward movement, with the least energy cost, and the least effort. The end result is faster race times, easier running and no more injuries!

Many have been asking for this book and are awaiting it eagerly. USA and British Triathlon teams have been working with Dr. Romanov with great success. Scientific research on the Pose Method effects on runners was conducted at the USA Olympic Training Center (Colorado Springs) in 1997, at Florida Atlantic University (Boca Raton, FL) in 1998-2001, at Sheffield Hallam University (Great Britain) in 2001, at Kubansky State University (Krasnodar, Russia) in 2002, and at Cape Town University (South Africa) in 2002 with Tim Noakes, author of the Lore Of Running, the runner,s bible. The results of the last research are very impressive. The load on knee joints is reduced 30%, the incidence of other injuries is drastically diminished. The method allows the athletes to run easier, faster, longer, and most significantly, injury free.

Get Pose Method of Running Complete – Nicholas Romanov, Only Price $27

Buy the Pose Method of Running Complete – Nicholas Romanov - $23.00 course at the best price at EsyGB. After your purchase, you will get access to the downloads page. You can download all the files associated in your order at here and we will also send a download notification email via your mail.