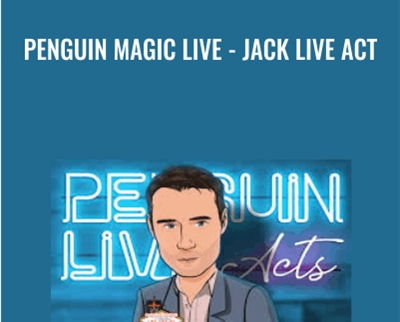 you'll get to watch the show, performed for a real audience, from start to finish. Then you'll go behind the scenes to learn about the routines, and the real secrets about building an act that can take decades to learn.

Buy Penguin Magic Live – Jack LIVE ACT - $11.00 Course at esyGB. You will have immediate access to the digital downloads in your account or your order email.

"I haven't known Jack that long but I have quickly become a fan. He's not just a clever creator, he's also a true showman. If you're looking for off-beat, killer effects, elegant handlings and engaging presentations, then check out Jack's lecture. Trust me, you'll be a fan, too."   — Cameron Francis

"Jack has gotten me interested in packet tricks all over again."— Geoff Williams

"If Magic is all about secrets then Jack is one of the best kept secrets in magic today. His well-structured routines are a joy to behold. Learn a few and I guarantee your audiences will never say — You don’t know Jack!"— Michael Kaminskas

"I have known Jack for a few years now. His professional approach to routines are both well thought out, and entertaining. He is a joy to watch and learn from. He fooled me many times, and for that I am grateful. This is stuff you can, and will use. Excellent."— Pattrick Przysiecki  (International Magic Champion)

"Jack has it all. Wit, charm, elegance, a sense of humor and skill that far passes that of most modern performers. He's what James Bond would be if he were a magician. Pay attention to every word he says and you will learn more than you ever thought possible."— Brent Braun

"Jack is a charming magician who can do it all. His “Samsung Fiasco” is one of the funniest and most clever variations on Pat Page’s “Easy Money” that I’ve ever seen."— John Lovick

What will he teach?

Jack is a generalist who loves to offer variety in his magic act. You’ll see some strong and theatrical card magic, but the lecture won’t be limited to cards. You’ll also learn about presentation, psychology, misdirection and timing. All of the tricks presented in this lecture are in his current working repertoire, so you can be sure there will be no filler. Each one is practical, hard hitting and reputation making and most have an automatic reset.

Nervous jolt : A coin is placed on a spectator’s hand and some pressure is made on the fingers and elbow to channel the energy. The coin eerily rise until it flips completely without you even touching it. Magician control everything despite the fact that everything is super fair and justified. Reputation making stuff.

Silver dust : A strong and very easy to follow coins across routine that has a real meaning to your audience. A nice lesson in psychology and body movement.

Printing 99.0 : A streamlined presentation for the classic Dominique Duvivier’s Printing. An easy "in your face" reset makes it a real worker. Even if you know and perform Printing, this one will really catch you off guard with the killer ending that will drop their jaw.

ESPecially Wild revisited : A super clean and direct handling for this Paul Hallas classic that you’ll fool yourself with, introducing the "Billboard enveloppes". A quick and nice mentalist effect followed by a super strong wild cards effect. Automatic reset.

Ultimate Ace Unleashed : Jack’s version on the Macdonald’s aces plot. Lots of ideas and killer subtleties that put it on another level. Automatic reset.

Samsung’s fiasco : The version of Richard Sanders Extreme Burn that everyone was hoping for. The bills change occurs 2 times and the trick now as a real meaning and is logical on top of you having an entertaining story to tell.

Daytona coins : A spectacular/do it everywhere/automatic reset coin routine that will establish you as a master sleight of hand artist. 17 magical moments in less than a minute will let them gasping for air. Need a little work but not hard to master.

Spectator’s ambition : Jack’s personalized version on the ambitious card plot where the spectator is the center of attention and gets all the applause. Lots of original phases and strong psychology throughout. This conclude by an extremely clean and self contained rising card. A great crowd pleaser. This include an original idea that will help you sign more clients.

Say my Name : An incredibly strong and direct mentalism effect that you can perform hopping table or on stage. A "magician’s in trouble" effect that really knock their socks off. Based on the "Oscar" plot. Automatic reset.

Zombie : Jack’s version on the classic cannibal plot, but with zombies. A nice, surprising, theatrical and streamlined version of this great classic. Uses the "Billboard enveloppe" and a severed hand. Highly entertaining.

Viva Las Vegas : Close up theatrical magic at its best. Jack’s adaptation of this great Mark Mason classic. You offer the spectators a trip to Las Vegas. An entertaining routine follows where you offer a 100$ casino chip to the spectator if you’re not able to find their freely chosen card using a coin. Strong, crystal clear, and at the end they will clap until their hands hurts.

Money Maker : An entertaining bill routine where you explain them how to easily make money without effort. You proceed to change your own 20$ bill into a 50, then the 50 is changed into an 100. You offer them to do the same with their own money and borrow a 20. This time it doesn’t work so instead you offer to change their 20 into 2 20$ bill … so … you take out scissors and cut their bill in 2 … at the end, you restore it and have the serial number checked for authenticity. Nice sure-fire gags throughout.

Premonition : Jack’s take on the book test plot. A prediction is made and 2 spectators makes free choices to chose a page number and a word anywhere in that page. An un-gimmicked dictionary is used. Reputation making material.
Who is Jack?

Jack has been performing professionally since 1995. He has made multiple appearances on a number of Canadian TV variety shows and has been in more than 30 TV commercials. His magic show "Intimate Illusions" ran at the Hilton Hotel in Québec City for five years straight. He performs at private parties, festivals, trade shows and onstage.

Classy and funny, Jack loves to add a touch of theater to his close-up magic and enjoys using his creativity to bring new life to old classics. He spent years perfecting his material before sharing it with the magic community. Penguin Magic is now proudly offering you the chance to learn some incredible magic from him.

Where can you see the greatest creators and performers share their professional magic act in front of a live audience and then teach you to do it? Only Penguin LIVE: ACTS!

The world's best magicians spend years developing the perfect act. Magic fans almost never get a chance to learn the real secrets behind what makes the top pros act so amazing. Until now. Penguin Live Acts gives you exclusive access to the biggest names in the industry, as they share how to perform their powerful A-material.

First you'll get to watch the show, performed for a real audience, from start to finish. Then you'll go behind the scenes to learn about the routines, and the real secrets about building an act that can take decades to learn.

Buy the Penguin Magic Live – Jack LIVE ACT - $11.00 course at the best price at EsyGB. After your purchase, you will get access to the downloads page. You can download all the files associated in your order at here and we will also send a download notification email via your mail.