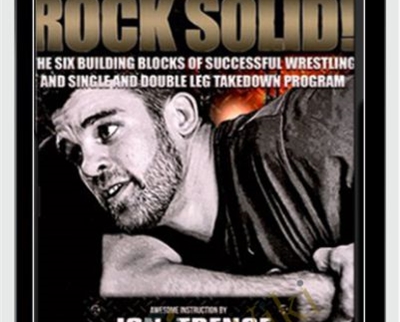 Buy John Trenge Rock Solid DVDRip - $43.00 Course at esyGB. You will have immediate access to the digital downloads in your account or your order email.

“Rock Solid” contains core wrestling technique and strategy from top notch wrestler Jon Trenge. In this course Jon has combined TWO PROGRAMS. First, there is the SIX BUILDING BLOCKS OF SUCCESSFUL WRESTLERS. These are the six skill sets and techniques that every wrestler needs to be good at to dominate on the mat. Next is Jon’s HIGH PERCENTAGE LEG ATTACK SYSTEM. This is Jon’s COMPLETE PROGRAM ON SINGLE AND DOUBLE LEG ATTACKS. Various types of attacks, as well as counters and setups are also covered here. Jon shares an unprecedented look into the world of takedowns, and focuses on how to DOMINATE your opponent with wrestling.

… ALL IN ONE PACKAGE.

In short, Jon has competed at the highest levels and firmly carved out his place in wrestling history. His highly decorated career has won the hearts of fans and movie critics.

JON’S LEVEL OF EXPERTISE IS UNPARALLELED AND NOW YOU CAN BENEFIT FROM HIS PERSONAL INSTRUCTION.

HERE IS A RUNDOWN OF JUST SOME OF THE MATERIAL INCLUDED IN THIS COURSE.

YOU GET ALL OF THIS AND MORE IN THIS 4 DVD SET:

Buy the John Trenge Rock Solid DVDRip - $43.00 course at the best price at EsyGB. After your purchase, you will get access to the downloads page. You can download all the files associated in your order at here and we will also send a download notification email via your mail.