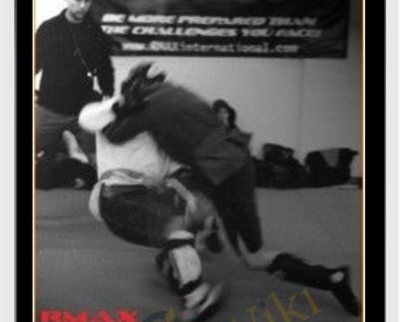 Sambo is one of the top five martial arts to be represented in the realm of No Holds Barred Mixed Martial Arts competitions because of its real-world brutal simplicity and toughness exemplified by fearsome fighters.

Buy EMAX SAMBO MMA Leg Attacks Scott Sonnon - $25.00 Course at esyGB. You will have immediate access to the digital downloads in your account or your order email.

Sambo is one of the top five martial arts to be represented in the realm of No Holds Barred Mixed Martial Arts competitions because of its real-world brutal simplicity and toughness exemplified by fearsome fighters.

One of a few foreigners to ever do so, Coach Sonnon earned the highest athletic distinction of the former Soviet Union – the coveted Distinguished Masters of Sport in SAMBO. A multiple time USA National Sambo Team Coach and Champion, International Combat Sambo Commission Chairman and American Sambo Vice-President. Scott Sonnon provides you with a rare opportunity to distance study in the actual methods and tactics used by masters of Russian Sambo.

There are three branches to Coach Sonnon’s RMAX Sambo: self-defense/combatives, sport (Sambo) specific, and mixed martial art. Coach Sonnon believes that since you will face other martial artists more than you will fight for your life or compete in sport wrestling, you must be able to first face that live resistance victoriously. The mechanics, sensitivity, rhythm and timing transfer into all other realms – critical attributes mandatory for becoming a successful, strong fighter.

Here is what some of the world's greatest grapplers in Sambo and Judo have said about Scott:

"One of the best teachers I have ever trained with!" – Steve Maxwell , World BJJ and Sombo Champion

"Scott is an untapped resource as far as I am concerned. What I always have enjoyed about his matieral is that it is conceptually far reaching. It always furthers my understanding of fighting and I was able to use some of the things from this DVD the first night I viewed it." – Jason Keaton , Brazilian Jiujitsu Black Belt (Renato Tavares) King of the Cage and Extreme Combat Challenge Veteran Owner of Cyclone Mixed Martial Arts Gym: www.cyclonemma.com

Coach Sonnon has described Sambo as "4D Grappling" due to the way grappling has changed over the centuries culminating in the world-renown "puzzle wrapped in a mystery inside an enigma" that is Sambo.

Learn how to integrate RMAX Sambo into your overall fight game so that you create a balanced, comprehensive strategy, and considering the vacuum of current Sambo skill in the MMA world – a 5-10 year advantage over your competition.

Recorded live, with fighters participating from around the world, order this rare glimpse into the combative strategies of one of the few Living Distinguished Masters of Sambo, one of the very few outside of Russia.

Buy the EMAX SAMBO MMA Leg Attacks Scott Sonnon - $25.00 course at the best price at EsyGB. After your purchase, you will get access to the downloads page. You can download all the files associated in your order at here and we will also send a download notification email via your mail.