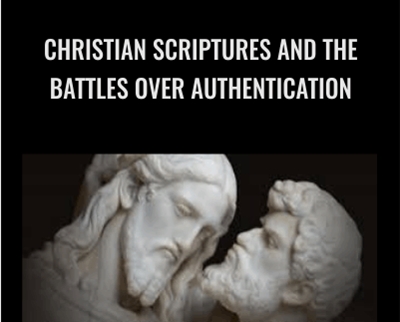 Christian Scriptures and the Battles over Authentication - Lost Christianities
$48.00
-
+
Add To Cart

Christian Scriptures and the Battles over Authentication – Lost Christianities

Christian Scriptures and the Battles over Authentication – Lost Christianities

Relying on these writings, Christians held beliefs that today would be considered bizarre. Some believed that there were two, 12, or as many as 30 gods. Some thought that a malicious deity, rather than the true God, created the world. Some maintained that Christ's death and resurrection had nothing to do with salvation while others insisted that Christ never really died at all.

Buy Christian Scriptures and the Battles over Authentication – Lost Christianities - $48.00 Course at esyGB. You will have immediate access to the digital downloads in your account or your order email.

In the first centuries after Christ, there was no "official" New Testament. Instead, early Christians read and fervently followed a wide variety of Scriptures—many more than we have today.

Relying on these writings, Christians held beliefs that today would be considered bizarre. Some believed that there were two, 12, or as many as 30 gods. Some thought that a malicious deity, rather than the true God, created the world. Some maintained that Christ's death and resurrection had nothing to do with salvation while others insisted that Christ never really died at all.

What did these "other" Scriptures say? Do they exist today? How could such outlandish ideas ever be considered Christian? If such beliefs were once common, why do they no longer exist? These are just a few of the many provocative questions that arise from Lost Christianities: Christian Scriptures and the Battles over Authentication.

The Struggle Within Christianity

"This is a highly educational trip into the confusion that often existed in the early church and how the church moved from there to the point of a consistent creed," writes Harold McFarland, editor of Midwest Book Review. Professor Bart D. Ehrman, who has recorded The Historical Jesus and The New Testament for The Teaching Company, returns to lend his expert guidance as you follow scholars' efforts to recover knowledge of early Christian groups that lost the struggle for converts, and simply disappeared.

This course focuses on the remarkable fact that many of the struggles of early Christians were not against pagans or other nonbelievers but against other Christians. Professor Ehrman will introduce you to these groups.

The Ebionites were Jewish Christians who followed Jewish laws but accepted Jesus as the Messiah without believing he was divine.

The Marcionites rejected Judaism completely to the extent that they believed that the God of the Old Testament and the God of Jesus were two separate Gods.

And the Gnostics believed that there was one true God but that there were also many other deities. In addition, they thought salvation came not from Christ's death and resurrection but from secret knowledge, or gnosis, of who one really was, where one came from, and how one could return to the heavenly home.

Get Christian Scriptures and the Battles over Authentication – Lost Christianities , Only Price 52

Surprising "Other" Gospels, and a Remarkable Archaeological Find

The fascinating heart of this course is its exploration of the Scriptures that were read and considered authoritative by these Christian sects. Many now are either known or believed to be "pseudepigrapha"—forgeries written in the names of famous apostles.

Whatever their origins, these documents can be viewed as lost versions of the New Testament. They provide a fascinating opportunity to study little known and sometimes controversial Scriptures that might have become part of the Bible.

The Gnostic Gospel of Truth is one of the most powerful and moving expositions of the joy of salvation to survive from Christian antiquity. Ironically, its views are diametrically opposed to those that dominate Christian belief today.

The Infancy Gospels, such as the Proto-Gospel of James and the Infancy Gospel of Thomas, describe events leading up to Jesus' birth and during his young childhood. Scholars are unsure whether they were meant to be taken seriously or merely served as entertaining fictions about a period of Christ's life for which other Scriptures provide little or no information.

The Apocryphal Acts of the Apostles, unlike the book of Acts that is in the New Testament, focus on the lives and exploits of individual apostles. They provide legendary, imaginative, and entertaining accounts of the activities of Jesus' closest followers.

Among the Scriptures you will study are two that have gained a measure of notoriety. The Coptic Gospel of Thomas is the one Gospel outside the New Testament that has caused the greatest stir among scholars and public alike. Purporting to be written by the twin brother of Jesus, it consists of 114 secret sayings of Jesus that are the keys to eternal life.

Could this be related to the sources from which the Gospels of Matthew and Luke were written? Or is it a Gnostic Scripture that was drafted later? Professor Ehrman weighs in with his and other scholars' best guesses.

Even more tantalizing, perhaps, is The Secret Gospel of Mark. Evidence for this remarkable document—a possible second Gospel by Mark, written specifically for the spiritual elite—was discovered by a highly respected authority on Christian antiquity, Morton Smith.

Smith's discovery may truly be an astonishing find. Then again, it may be an amazing feat of forgery. Adding to the mystery is the fact that the letter has been locked away in a library in Jerusalem and is unavailable for analysis by other scholars.

In these lectures you will also hear about a remarkable archaeological event: the discovery in 1945 of a treasure trove of missing Gnostic Scriptures at Nag Hammadi, an Egyptian village near the city of Luxor.

Consisting of 13 leather-bound volumes unearthed in an ancient grave by Bedouin camel drivers (the full story, which you will hear, resembles the plot of a bestselling adventure novel), the Nag Hammadi Library, as it came to be known, was a watershed event in the search for lost Christianities.

It proved to be an invaluable collection of original writings by Gnostic Christians. Scholars had known many of these only through references in written attacks against the Gnostics by such church fathers as Tertullian of Carthage (A.D. 200) and Hippolytus of Rome (c. A.D. 200). As you will discover, the library verified much that had been known about Gnosticism but also revealed significant misconceptions.

Are There Forgeries in the New Testament?

But: If all of these Christian Scriptures existed, how was the New Testament we now know put together and approved?

Who decided which books should be included? On what grounds?

How do we know that those who selected the final books got it right? If many of these writings were forgeries, how can we be sure that forgeries weren't included in the New Testament?

These are questions that naturally arise from the search for lost Christianities, and which make it such a new and appealing subject to study.

Get Christian Scriptures and the Battles over Authentication – Lost Christianities , Only Price 52

Buy the Christian Scriptures and the Battles over Authentication – Lost Christianities - $48.00 course at the best price at EsyGB. After your purchase, you will get access to the downloads page. You can download all the files associated in your order at here and we will also send a download notification email via your mail.