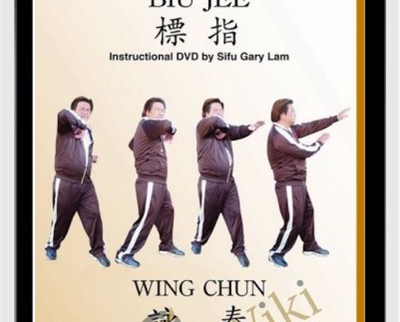 Biu Jee is Sifu Gary Lam's entry for the third and final open-hand form of Wing Chun. This form is also known as the "Emergency Form." Once again the late Wong Shun Leung's experience with challenge fights (Beimo) can be seen within the form. As an example Sifu Lam explains that Biu Sau within "Biu Jee" is underhand, but it is not used with a shift of the body, which is misunderstood by some.

Buy Biu Jee – Gary Lam - $18.00 Course at esyGB. You will have immediate access to the digital downloads in your account or your order email.

Customer/3rd Party Review – This review was done by a customer/3rd party and is listed here for you reference only. The views and opinions of the reviewer are not those of Everything Wing Chun and do not necessarily reflect EWC's views or opinions on the subject matter. It is posted, like all customer reviews, to give you more info on the product and to give you different opinions on a product so that you can make the best decision for yourself about its content. The review is NOT by an EWC employee or contractor and EWC cannot stand by anything said in any customer/3rd party review. Enjoy!

Biu Jee is Sifu Gary Lam's entry for the third and final open-hand form of Wing Chun. This form is also known as the "Emergency Form." Once again the late Wong Shun Leung's experience with challenge fights (Beimo) can be seen within the form. As an example Sifu Lam explains that Biu Sau within "Biu Jee" is underhand, but it is not used with a shift of the body, which is misunderstood by some. Biu Sau in Biu jee is a breaking action, NOT an attack. The form itself is demonstrated multiple times and from various angles. Not only does Sifu Lam demonstrate the form, but he also has adds Fung Hao and closing, which can include take downs, the 12 hands of Pak Sau, and covers the Cantonese names with subtitle of the techniques, something not done in the previous DVDs. As to the presentation of the DVD Sifu Lam seems more at ease, the camera angles wider to encompass the techniques, and the sound is crisp. It should be mention that the camera moves around quite a bit in the DVD. All in all this is a very professional production at a length of 47:49. The DVD is recommended as it is derived from that genius of Wing Chun Wong Shun Leung.

A long time student of the late Wong Shun Leung the "Biu Jee" DVD is Sifu Gary Lam's entry for the third open-hand form of Wing Chun This form is sometimes known as the "Emergency Form." Biu Jee was the one Wing Chun form that was directly taught by Yip Man to very few students. Without mastery of both "Sil Lim Tau" and "Cham Kiu" the third form cannot be mastered. This is the only reason that Yip Man did not directly teach the form to more of his students. Wong Shun Leung learned the form directly from Yip Man and then began to modify the form after his numerous challenge fights an example being Chuen San. Chen San is distinctly different from Yip Man's Chuen San.

The first form of Wing Chun "Sil Lim Tau" establishes the fundamental techniques of Wing Chun. The second form "Cham Kiu" elaborates upon the ideas of the first form and adds, shifting, stepping, striking moving targets, recovery, and "Chi Sau" specific techniques. Within fighting the first two forms of Wing Chun are sufficient for the majority of situations encountered. However, what if the Wing Chun fighter makes a mistake, is overpowered, is taken down, faces multiple opponents, or gets a limb damaged or broken? This is the realm of the third form of Wing Chun "Biu Jee." The first two forms of Wing Chun take care of the majority of the situations encountered when fighting however, "Biu Jee" is used when something has gone wrong either due to an error by the fighter, lost position, or a damaged limb. Wong Shun Leung himself frequently stated, "I hope you never have to use this." Because when using Biu Jee victory is NOT guaranteed; indeed one may escape the encounter albeit with serious injury. Fighting is far from ideal and since situations can arise, Biu Jee was formulated to deal with these far-from-ideal situations.

"Biu Jee" is unique. The form "Biu Jee" does not break up neatly into sections as do the first two open-hand forms or even the "Mook Yan Jong" form. The techniques in Biu Jee are akin to a collection of techniques. "Biu Jee" breaks all the rules of Wing Chun such as center line theory, not grabbing and facing. Wong Shun Leung considered the form unfinished or better said open to the addition of new techniques at some point in the future. This DVD demonstrates Wong Shun Leung's version of the "Biu Jee."

Sifu Lam is careful to explain the reason that "Biu Jee" is called the "Emergency Form." The emergency arising due to a damaged leg or arm, when facing multiple opponents, or even when one's arms have become trapped and "Sil Lim Tau" or "Cham Kiu" techniques cannot be utilized. Sifu Lam also explains the general fallacies that have been associated with "Biu Jee" as being deadly, and vital point striking. Unquestionably once the "Biu Jee" level is achieved then the Wing Chun student has reached a high level of fighting, but it is far better to stay away from such conditions that warrant the use of or necessitate the use of "Biu Jee" techniques as Sifu Lam emphasizes repeatedly.

Mastery of both "Sil Lim Tau" and "Cham Kiu" are necessary before Biu Jee can be embarked upon. This last sentence cannot be overstated. Theory, ideas and techniques of the two forms need to be understood fully. Remember that Biu Jee breaks the ideas and theories central to Wing Chun. This could present a possible state of confusion for the student should the student not be properly schooled in both "Sil Lim Tau" and "Cham Kiu." As Sifu Lam demonstrates and elaborates it is far better to hit an opponent with one of the "Sil Lim Tau" or "Cham Kiu" techniques than to have to use a Biu Jee elbow precisely because the short distance from the opponent opens one up to a strike(s) by the opponent.

With each of the techniques within the form Sifu Lam highlights important points to that technique that that a student might misconstrue, misunderstand or misapply. The "Biu Jee" form is not simply demonstrated and then the various techniques demonstrated with an opponent. Rather the form's details are flushed out, fully elaborated and stressed. One can easily see that the years Sifu Lam spent with Wong Shun Leung were well spent.

Once the form is demonstrated in totality Sifu Lam then adds additional material in the form of Fung Hao, Closing and Pak Sau. The Pak Sau subsection itself has 12 variations. In this section Sifu Lam clearly demonstrates the potential quickness of Wing Chun hand techniques. In fact Sifu Lam states the faster the attack the faster one can respond. Clearly one must have good form and great structure before thinking about speed. Speed without good from and technique is useless. Sifu Lam spent 21 years with Wong Shun Leung.

The production values of the DVD are top notch. The sound is clear, the camera has more of a wider coverage, and the lighting is optimal. More importantly the form is shown many times from various angles to better demonstrate the individual techniques. Sifu Lam demonstrates the form more than once not for show, but for deliberate clarification. Also the DVD does have German subtitles. In the very last demonstration of the DVD the Cantonese terms of the techniques are subtitled. The length of the DVD is approximately 47:49.

Buy the Biu Jee – Gary Lam - $18.00 course at the best price at EsyGB. After your purchase, you will get access to the downloads page. You can download all the files associated in your order at here and we will also send a download notification email via your mail.