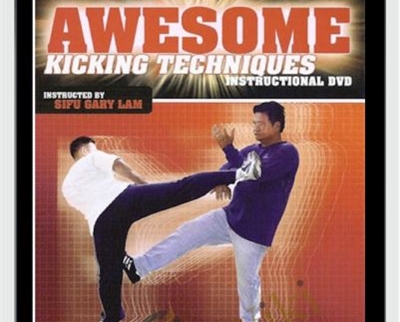 Customer/3rd Party Review – This review was done by a customer/3rd party and is listed here for you reference only. The views and opinions of the reviewer are not those of Everything Wing Chun and do not necessarily reflect EWC's views or opinions on the subject matter.

Buy Awesome Kicking Techniques – Gary Lam - $15.00 Course at esyGB. You will have immediate access to the digital downloads in your account or your order email.

Customer/3rd Party Review – This review was done by a customer/3rd party and is listed here for you reference only. The views and opinions of the reviewer are not those of Everything Wing Chun and do not necessarily reflect EWC's views or opinions on the subject matter. It is posted, like all customer reviews, to give you more info on the product and to give you different opinions on a product so that you can make the best decision for yourself about its content. The review is NOT by an EWC employee or contractor and EWC cannot stand by anything said in any customer/3rd party review. Enjoy!

Sifu Lam brings a wealth of experience in training fighters, his own combat experience as well as the wealth of knowledge sifu Lam gained from the late, legendary Wong Shun Leung. There are of course many methods of training the legs for the decidedly different kicking techniques of the Wing Chun system. Some of the exercised and workouts with equipment seen on the DVD seem to bear little relation or resemblance to Wing Chun kicking, but the point is to utilize exercises that help to focus effectively on the kicking techniques within the Wing Chun system. It is by the practice of these exercises that control, power, speed, timing and coordination of hands as well as the body that Wing Chun kicking becomes effective and highly applicable.

"Awesome Kicking Techniques" runs at approximately 45 minutes and is divided into six chapters. In each chapter Sifu Lam begins with the specific exercise. Once sifu Lam has explained the specifics of the training exercises, sifu Lam then moves on to demonstrations with a partner and then drills the various content of the specific chapter. Kicking within the Wing Chun system is always coordinated with the body rather than as a solitary technique. Within the Wing Chun system a kick can become a step and a step can become a kick and a kick can become multiple kicks as demonstrated in various chapters of the DVD. These characteristics make Wing Chun kicking decidedly effective.

In the first section of the DVD sifu Lam uses what he calls "four corner" training on an automobile tire. The term "four corner" refers to the use of the inner step of the foot, the outer step of the foot, the ball of the foot, and finally the back heel of the foot. The four corner training is applied to a rubber tire that slides across a smooth cement surface. Sifu Lam does state that careful attention should be given to the stance of the body lest the kicking degenerate in both power and structure. Kicking the tire properly, without leaning forward, helps to generate power, shift direction of an incoming force and of course provides tactile feedback.

The next chapter uses hanging punching bags as part of the training equipment. While the techniques demonstrated seem to resemble Muy Thai, sifu Lam is quick to point out the training techniques are not Muy Thai. Hand-leg cooperation, stance, follow through are all important points that sifu Lam stresses in this leg/kick training section. Sifu Lam also covers three distances long, short and shorter for kicking/kneeing. Wing Chun kicking does not use wasted motion; economy of technique is always present. Sifu Lam points this out repeatedly. Five types of kicks and five types of punching techniques or "actions" are demonstrated, which make for ten actions over all.

The subsequent chapter takes the techniques or "actions" as sifu Lam labels them, from the bag training and applies these to training with a partner. Not every technique from the previous chapter is covered. One very good example of relaxing within Wing Chun, using the second action utilizes a high kick by the opponent which is defended by a very relaxed arm followed by a kick to the lower part of the leg at the knee by the Wing Chun fighter. This is a very effective use of Wing Chun relaxation. Sifu Lam does state that the kick by the opponent absorbed by the relaxed arm will "not feel good," but the pain felt is certainly less than had the force of the kick been taken to the head.

The penultimate chapter of the DVD shows eight distinct Wing Chun kicking actions that can be used in tournament fighting or street fighting. At this point in history many forms of martial arts are currently practiced and the point of this chapter is to deal with those various martial arts by deliberate and effective training of Wing Chun kicks. In this chapter sifu Lam uses two students to demonstrate each of the kicks. Because over time great power is developed, protective gear should be worn to prevent injury to the partner of the kicker and control is quite necessary. Wing Chun kicks, as demonstrated in this section of the DVD are powerful, fast and very controlling.

The final chapter deals with crossing hands and kicking. Initially, sifu Lam demonstrates purely hand techniques against an attack. Sifu Lam progresses by showing the hand techniques slowly and then accelerates the pace to show the true speed of Wing Chun hands. However, to fully utilize the Wing Chun system Sifu Lam adds the kicking techniques developed in the previous sections to show the full extent of the power of Wing Chun kicking within fighting. Again, the results of using both and kicking can be quite spectacular.

This DVD is a compliment to the other DVD, "Wing Chun Kicking 1" in sifu Lam's Wing Chun DVD series. The DVD concentrates on both training the legs with equipment and then with a partner. Each of the chapters is sequenced to explain and illustration the effectiveness of Wing Chun kicks, which most likely few will use in actual combat. However, since Wing Chun is a complete system, Wing Chun kicks are fully developed and add a substantial and powerful asset to the Wing Chun practitioner's arsenal when fighting.

Again "Awesome Kicking Techniques" is geared towards the advanced Wing Chun practitioner and is there for considered an advanced Wing Chun topic DVD. The DVD is highly recommended for those wishing to improve their Wing Chun kicking regardless of their lineage. Sifu Gary Lam follows and teaches the Wong Shun Leung Wing Chun system, which is an offshoot of Yip Man Wing Chun.

Buy the Awesome Kicking Techniques – Gary Lam - $15.00 course at the best price at EsyGB. After your purchase, you will get access to the downloads page. You can download all the files associated in your order at here and we will also send a download notification email via your mail.